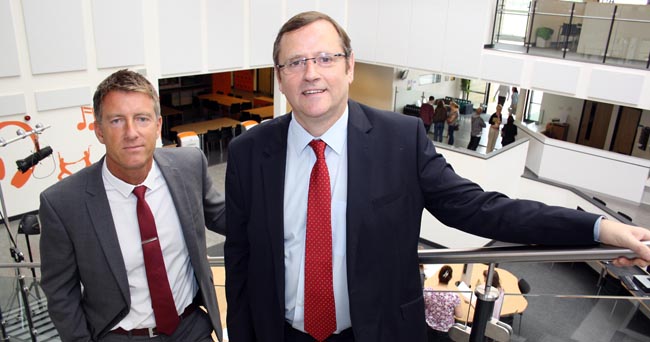 A North-East MP says his former school should be used as an example, after achieving year-on-year improved exam results.

Sedgefield Community College are one of the region’s best performing schools, with 81% of students getting at least five A-C GCSEs – a jump from 37% just three years ago.

And Phil Wilson, the Labour MP for Sedgefield who went to the school back in the 1970s, says its winning formula should be used as a beacon for others.

“It’s down to a number of things, mainly excellent teaching staff and the hard work of the pupils, a new building helps, and I also think the support children get from parents is key.

“That formula has culminated in the results we’re seeing today and there’s a lot of students who can now go on to do even better in the future.

“I went to this school 40 years ago, and to see the improvements here is great and the formula they have at Sedgefield should be used as an example.

“Overall qualifications standards in County Durham have gone up over the years and people have tried to knock it, saying GCSEs have got easier.

“But it’s actually down to hard work. We should celebrate what our children have achieved, and I want to see everyone go on to University or do whatever they want to do in their lives and be highly successful.”

As well as moving into a brand new building three years ago, Sedgefield College is one of only two schools in the North of England to achieve ‘thinking school’ status.

Headteacher Dave Davies said: “To achieve such results in a year when many schools are seeing results decline is a quite stunning achievement.

“Students, parents and staff have every reason to be extremely proud of both their individual achievements and the part they have played in the continuing success story at Sedgefield, and I would like to thank and congratulate everyone involved.”

Mr Davies says the school is determined to build on its success.

He added: “I do not consider it ‘job done’ at Sedgefield.

“We have already begun to look at where we can further improve, and plans are already in place that will ensure out students continue to receive an education of the very highest quality.

“Our Mission Statement is to ‘achieve’, and year-on-year students are doing exactly that, and in increasing numbers.”

Sedgefield’s new school opened in January 2009, and was built under the Labour government’s Building Schools for the Future programme.