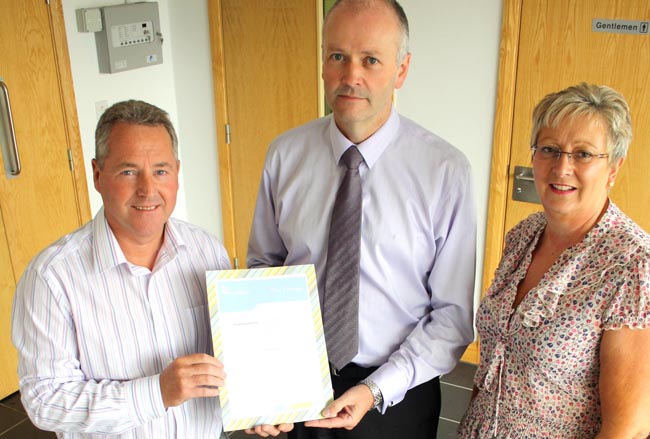 A County Durham firm has been recognised for its work in the community after showing hundreds of schoolchildren the process of steel fabrication.

Newton Aycliffe-based Finley Structures has been awarded a Values Award by building corporation Carillion Plc for its community engagement.

Finley is one of Carillion’s major sub-contractors and fabricates their steel as well as erecting the frames for a lot of the 30-plus new-build schools Carillion have built in the North-East in the last few years.

Hundreds of youngsters have passed through Finley’s factory on Aycliffe Business Park to see how raw steel would form the core of their new building, before signing a steel plate which was welded in permanently and incorporated into the construction.

Carillion operations director David Kennedy, pictured handing the award to Finley Structures managing director John Finley and the company’s HR manager Pauline Hadwin, praised the family-run firm, saying: “More than 130 children have visited Finley Structures to see their schools being built and they make sure it’s a fantastic experience for the youngsters.

“We take the young people to see the steel being made and we’re also taking them to see the bricks being produced, so they get a real insight into how it all comes together, so when it’s completed they’ll feel they’ve been involved in it every step of the way.”

John Finley, managing director of the steel firm, added: “It’s a pleasure to see youngsters come to our factory to get an insight into the world of work as well as seeing their own new school being built almost from scratch.

“It’s always nice to involve young people wherever we can and it’s rewarding to see them come in and learn so much about our operations. Our door is always open.”

Carillion plc is one of the UK’s leading support services and construction companies and have recently worked on 22 schools in the North-East and six in Durham.